The mining sector is being weak with lower prices 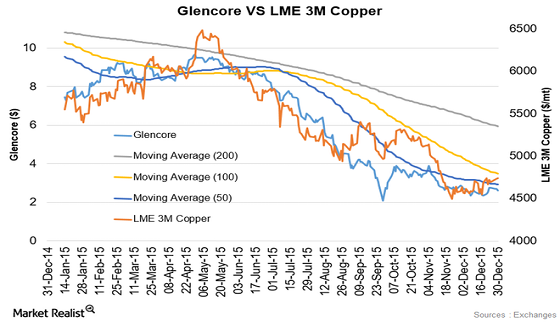 Glencore (GLNCY), the metals trading and mining giant, has fallen 72% since the beginning of 2015. The bearishness in the entire base metals sector pulled Glencore’s prices down to multiyear lows.

Metals Rebound From Biggest Drop in 3 Months as China Intervenes

Copper climbed the most in two weeks and nickel gained after China sought to support its stock market following Monday’s rout that sent metal prices tumbling.

State-controlled funds in China bought equities and regulators signaled a selling ban on major investors will remain beyond this week’s expiration date, according to people familiar with the matter. Most metals traded in London and a gauge of mining shares rose.

An index of six main contracts on the London Metal Exchange slumped the most since September on Monday after a plunge in mainland China shares triggered a trading halt. Slowing economic growth in the Asian country, the biggest commodities buyer, has curbed demand for metals and sent prices to near the lowest in six years. That’s prompted Chinese refiners and some of the world’s top miners to pledge output cuts to reduce a glut of material.

“Chinese stock markets have stabilized, thanks largely to government intervention, which has clearly helped sentiment in the metals space,” David Wilson, an analyst at Citigroup Inc. in London, said by e-mail.

Copper for delivery in three months climbed as much as 1.5 percent, the most since Dec. 18, and was up 1.2 percent at $4,665 a metric ton by 1:03 p.m. on the LME. Stockpiles of the metal held in warehouses tracked by the bourse fell for a fourth day. Nickel prices advanced 1.4 percent.

On the LME, aluminum and zinc also gained, while lead fell and tin declined for a fourth day to the lowest since Nov. 24. A speculative short position, or bet on lower prices, in nickel shrunk to less than 8 percent of open interest as of Dec. 30, from 29 percent in November, according to Marex Spectron Group.

Slumping prices have hurt producers, including those in Indonesia, which before a 2014 export ban was the world’s biggest shipper of mined nickel. The country may relax rules on the export of metal concentrates following the collapse in metals prices, while keeping a ban on raw ore shipments, a minister official told Bloomberg.