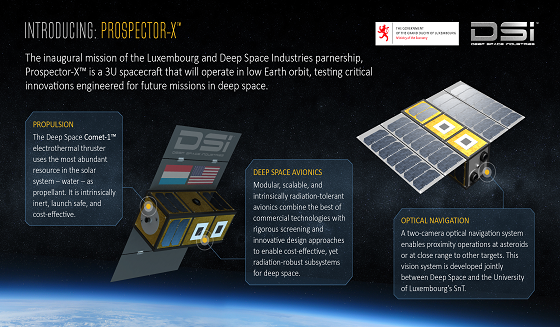 Artist rendition of a mining operation in space. (Screenshot via YouTube)

The government of Luxembourg is moving forward with an ambitious plan to profit from asteroid mining by signing a deal with two US space research companies, which will be conducting missions to prospect for water and minerals in outer space.

The tiny European country, which has been studying possible involvement in the sector since 2013, announced in February it was officially joining the race to develop a space mining industry.

The nation, which aims to become a global centre for asteroid mining, has signed a deal with California-based Deep Space Industries to develop Prospector-X, a small and experimental spacecraft to be built in Luxembourg, which will test technologies for prospecting and mining near Earth asteroids after 2020.

The government is also in the final stages of negotiations with another US group, Planetary Resources, a pioneer in the field whose shareholders include known names such as Google’s CEO Larry Page & Executive Chairman Eric Schmidt, Virgin founder Richard Branson and several other Silicon Valley-based entrepreneurs.

Prospector-X is a small and experimental water-powered spacecraft, to be built in Luxembourg, which would develop the technologies that might be used to send robotic explorers to investigate asteroids after 2020. (Image courtesy of Deep Space Industries)

The only international legal body available dates back to 1967. The Outer Space Treaty, signed by the U.S., Russia, and a number of other countries, says that nations can’t occupy nor own territory in space.

“Outer space shall be free for exploration and use by all States,” the treaty says, adding that “outer space is not subject to national appropriation by claim of sovereignty, by means of use or occupation, or by any other means.”

And while a discussion on the matter is bound to happen, countries such as the US, have decided to make their own rules. In November, President Barack Obama signed a law that grants American citizens rights to own resources mined in space.

The ground-breaking rule was touted as a major boost to asteroid mining because it encourages the commercial exploration and utilization of resources from asteroids obtained by US firms.

Such law, however, does include a very important clause, as it clarifies that it does not grant US citizens “sovereignty or sovereign or exclusive rights or jurisdiction over, or the ownership of, any celestial body.”

Geologists believe asteroids are packed with iron ore, nickel and precious metals at much higher concentrations than those found on Earth, making up a market valued in the trillions of dollars.

Some asteroids are packed with minerals valued in the trillions of dollars. (Image by MarcelClemens|Shutterstock.com)

But exploiting the resources celestial bodies have to offer will require different kinds of equipment than those currently used on Earth. This, as minerals harvested in outer space could be used both out there and in our planet, and separate machines are needed to be able to do both.

The first part of asteroid mining technology is already being studied by DSI by focusing on extracting water from asteroids. But anything that has to do with the mining celestial bodies for minerals is much more difficult, experts say.

“It’s almost as if we were drilling for the first oil and we were developing the internal combustion engine,” DSI Chairman of the Board, Rick Tumlinson, said in a statement.